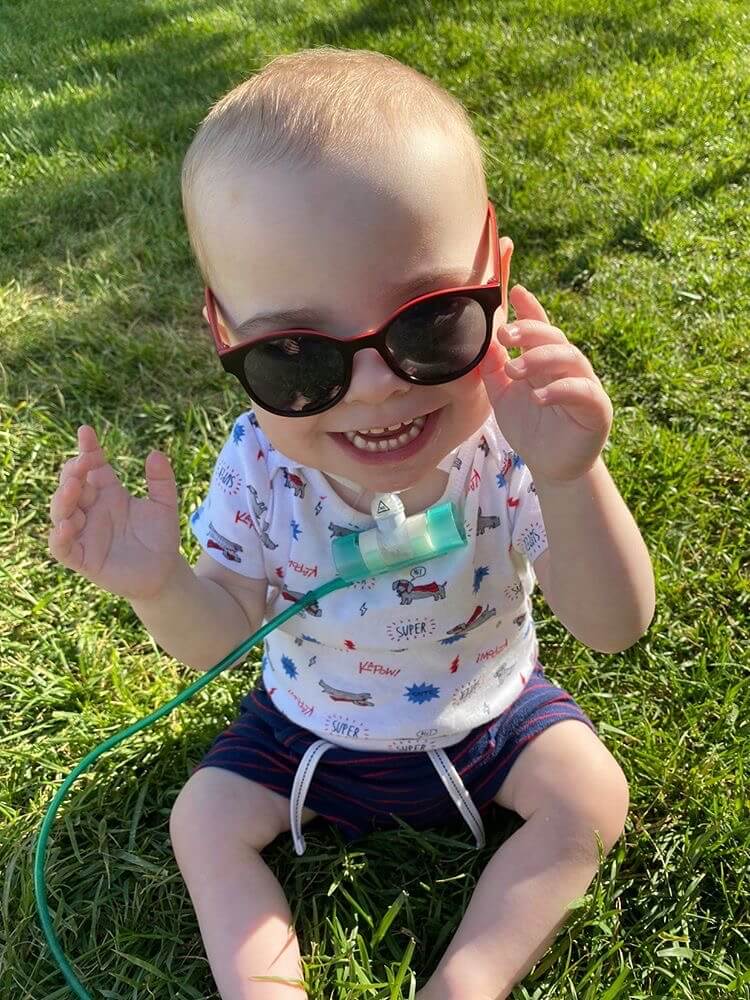 There are also individuals who have had a tracheostomy prior to the pandemic.  The reason for the tracheostomy tube varies. Adults as well as babies may have a tracheostomy tube.  The American College of Chest Physicians has provided Care Recommendations for the Home Based Ventilation Patient Undergoing Therapy for the Known or Suspected Respiratory Viral Infection with Covid-19.

To honor Tracheostomy Tube Awareness Week, we will provide a brief understanding of the tracheostomy and show some stories of those who have a tracheostomy.

What is a tracheostomy?

A tracheostomy is a procedure in which a stoma (hole) is created into the trachea (windpipe) in which a tracheostomy tube is placed.  The procedure can be performed surgically or as a percutaneous procedure.  For more information see  Basics of Breathing, Indications and Benefits.

What are the reasons for a tracheostomy?

The indications for a tracheostomy include:

For Tracheostomy Tube Awareness Week we are spreading the love of those with tracheostomy and/or mechanical ventilation.  Here are a few stories of some trach warriors. 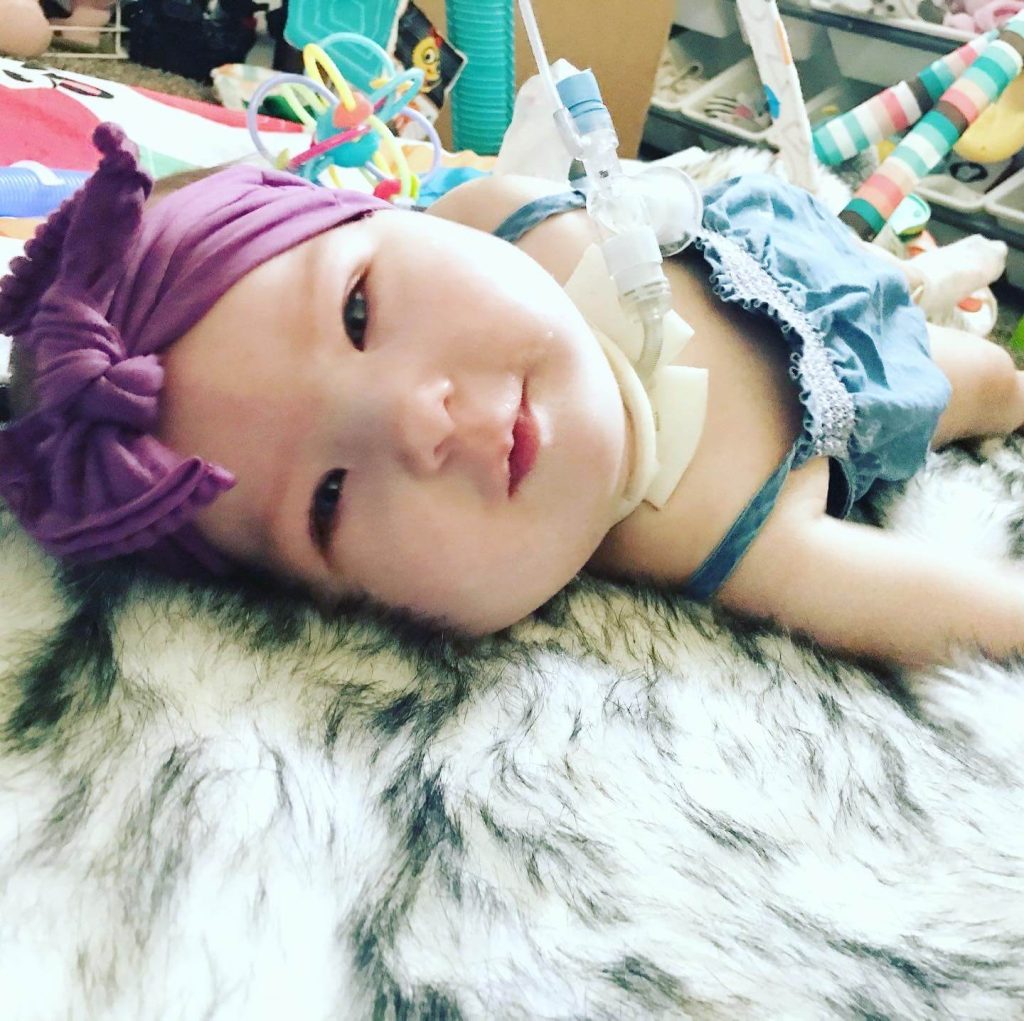 “Wynter Was Born 8/23/19 with Several Airway anomalies all unknown until birth. She was transferred to a hospital 4 hours away right after birth. It was there it was decided that on 9/9/19 she would Have tracheostomy surgery. It was definitely a very hard day handing over my Infant for surgery. But afterwards we found out quickly the trach was a great decision, it gave her life!”

“Kash is a 26 week preemie that spent 9.5 months in the NICU.  He needed a trach so he could come home with a stable, comfortable airway and still get the vent support that he needed. He’s been home for 9 months and he is busy being an active toddler!  We thought the trach would hold him back, but it’s allowed him to live!” 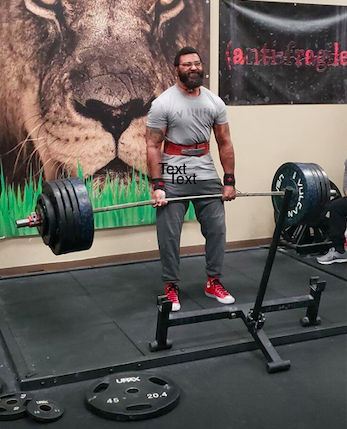 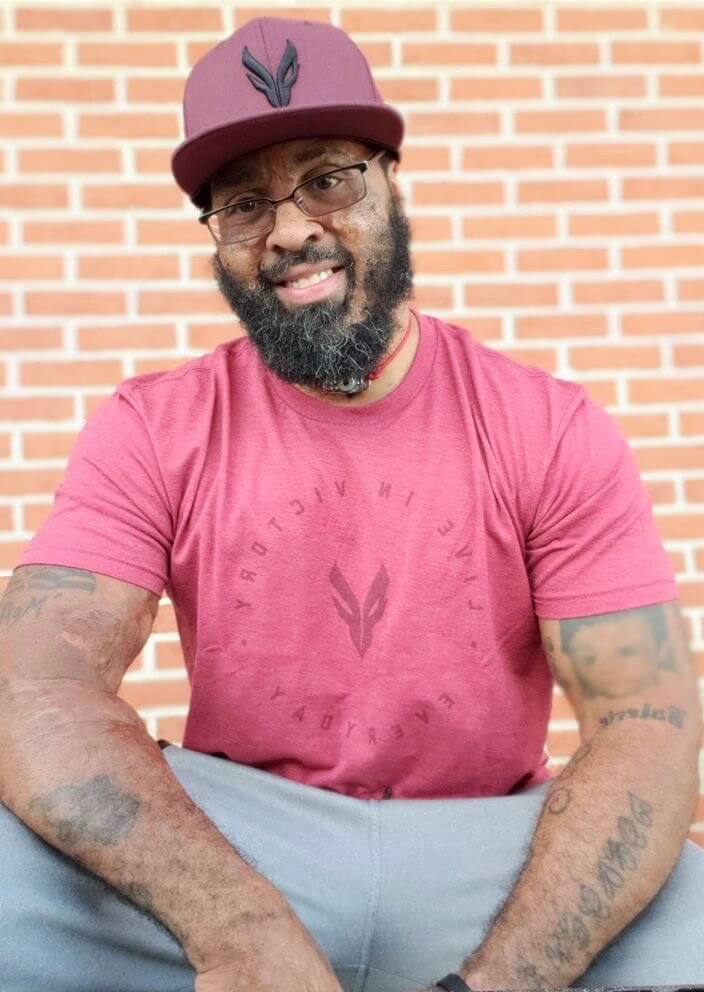 “Hello, my name is Frank Williams and I am 37 years old. I was in a house fire when I was just 2 years old.  I suffered 3rd degree burns on 50% of my body and 60% of my lungs were damaged.  I have had my trach since I was 2 years old.  I had self confidence and self love issues for a long time.

I joined the gym about 3 years ago and I believe it has helped me a lot with my confidence issues.

One of my main goals is to visit hospitals with young kids who have suffered burns and who have trachs to let them know they will be fine.” 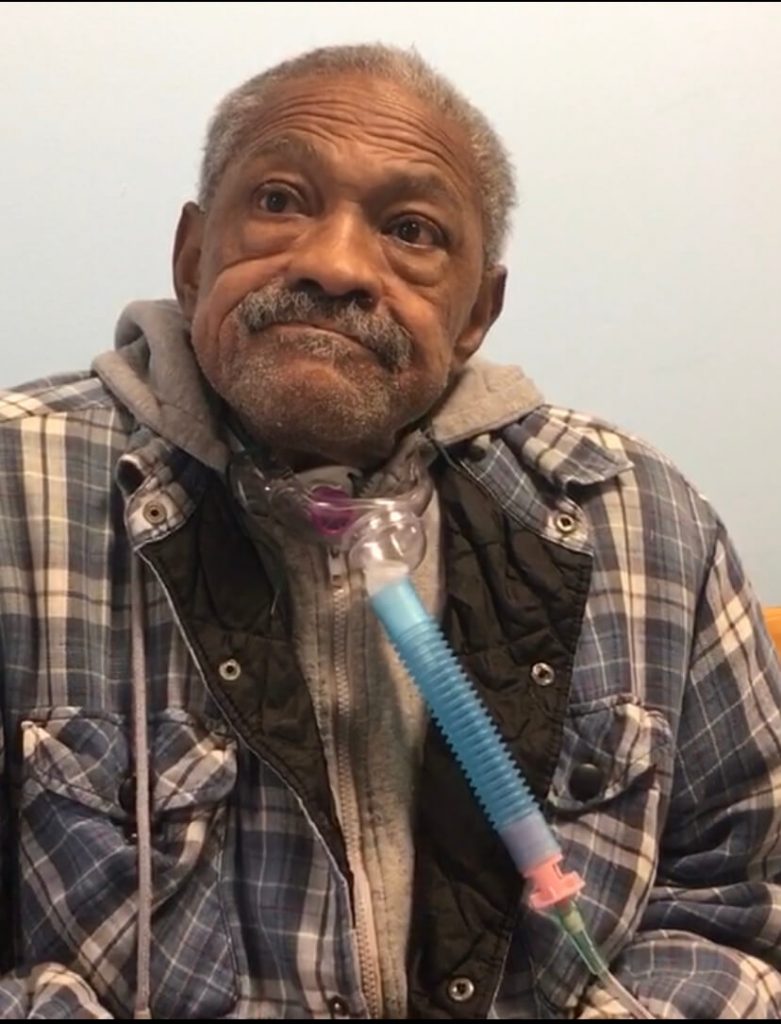 “My name is Theodore and I have a trach and COPD.  It was terrible not being able to speak.  You can’t communicate with nobody, like what kind of clothes I wanted to wear, how I felt, what I wanted to do like go to the bathroom, or how much food I wanted to eat.  The simple things that you took for granted.  With a speaking valve, it was easier to speak.” 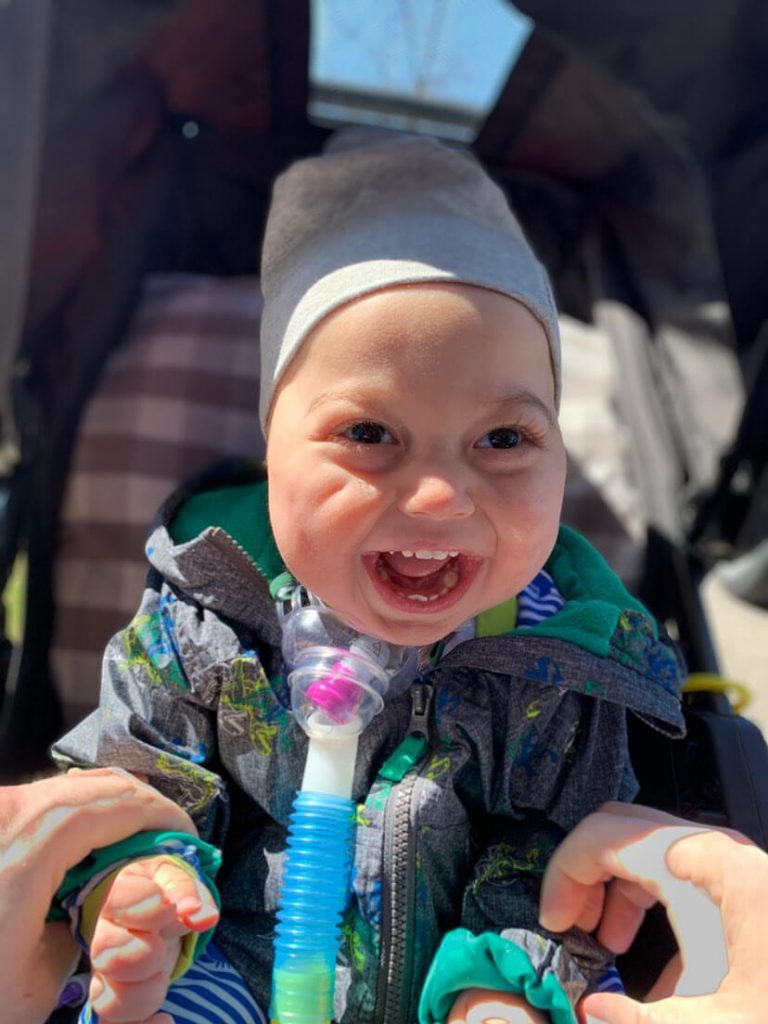 Nathan is 19 months old and due to complications from his double lung transplant, he is trach and vented.

Baby Nathan has a GoFund me page for those interested in donating. 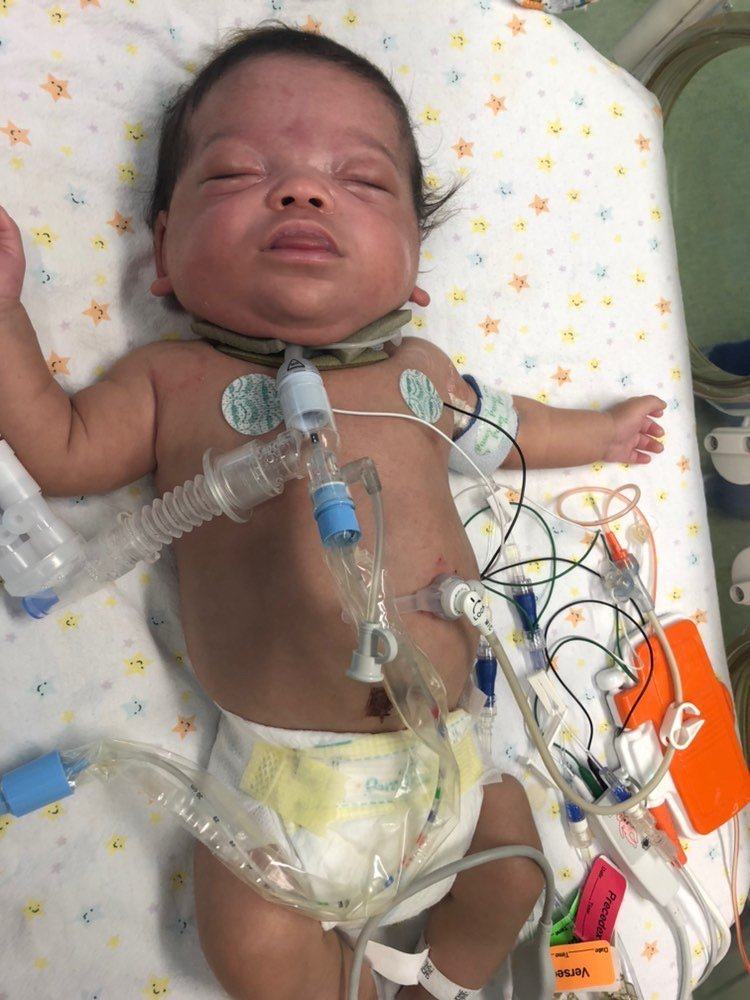 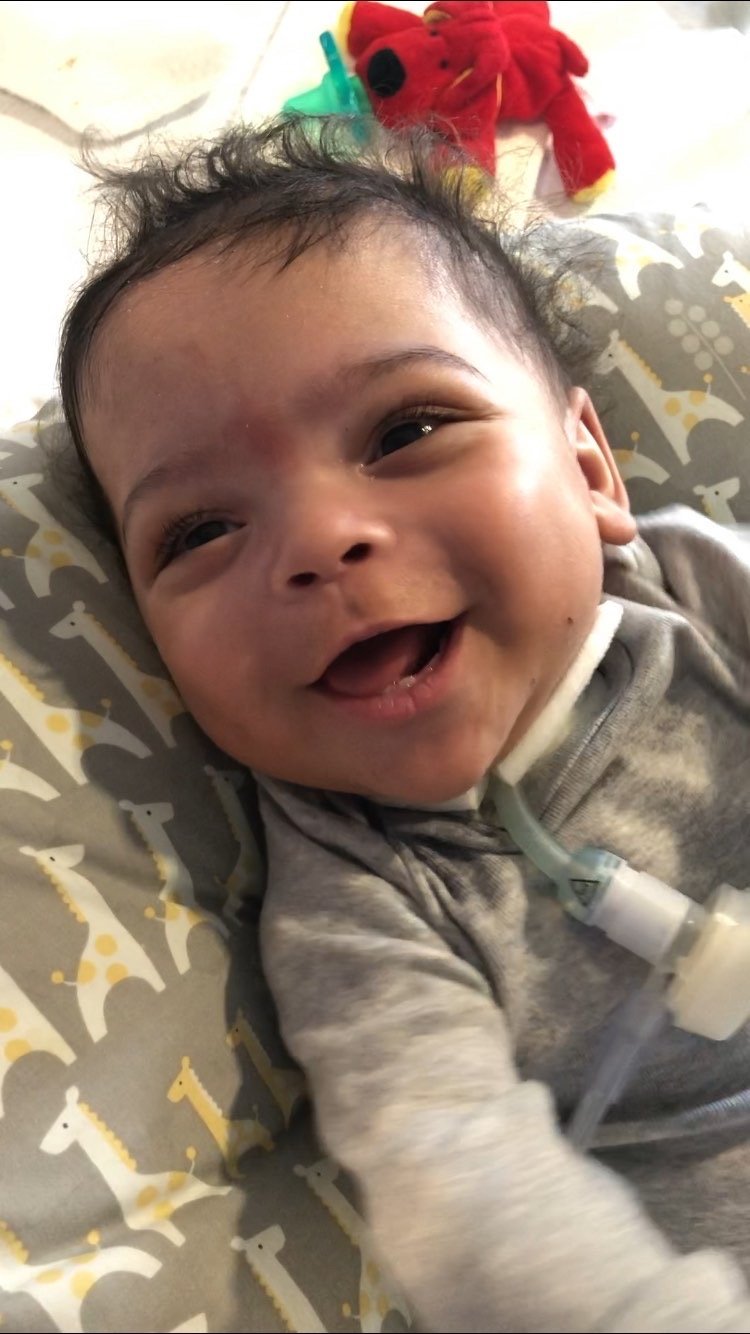 “Karter was born at 26 weeks with severe chronic lung disease.  At 4 months old (4 weeks adjusted) he got his trach.  We were so scared about all it would mean for him, and he has had many setbacks and complications, but ultimately it has been the best decision we have made.  He is thriving and will be home with us in just a couple weeks!” 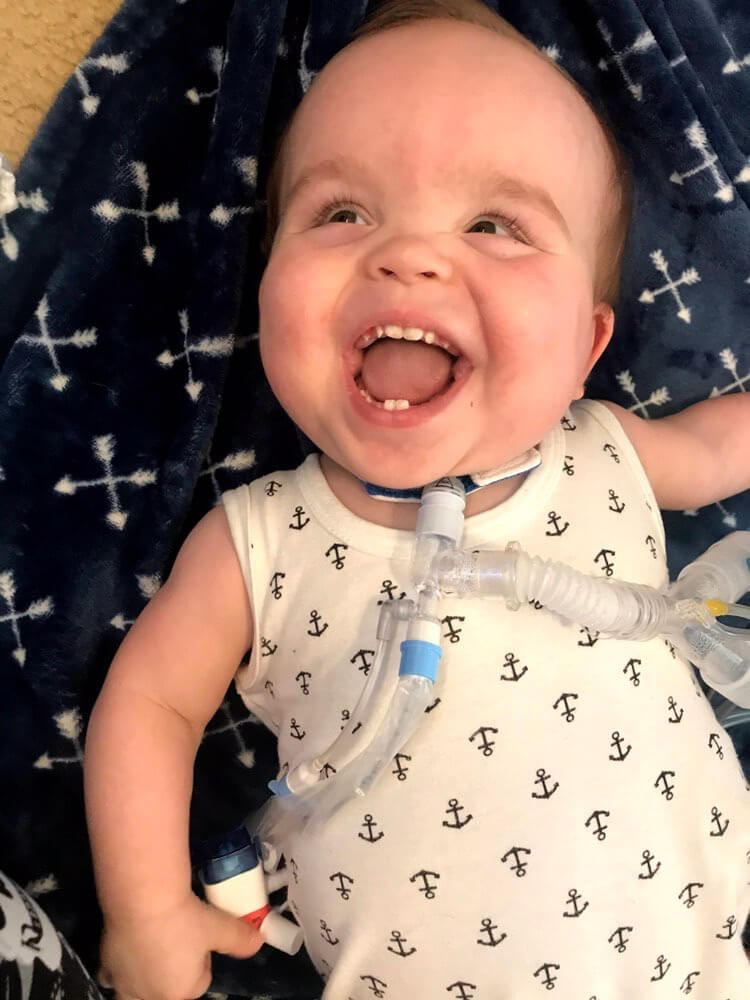 “Silas was born at 27 weeks and spent 245 days in the NICU.  Because he required ventilation so long, it caused further damage to his premature lungs.  He received a trach at 4 months old.  He has now been home close to 9 months and is starting the process to come off the ventilator with a goal of eventually removing his trach as well.” 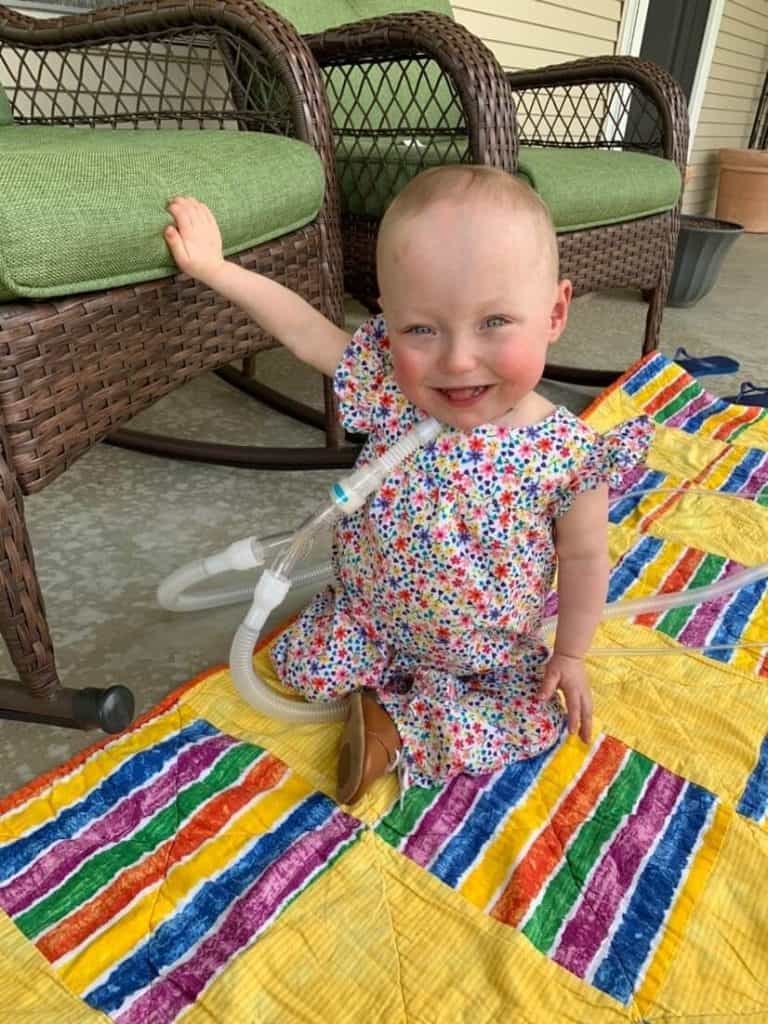 “Lily was born in August of 2018 at 24 weeks an 3 days after an IUGR diagnosis at 20 weeks and the passing of her twin sister at 24+0.  She was born weighing 504 grams (1lb, 1oz) and had a long road in the NICU including three surgeries, several infections, weeks on high frequency ventilation, and code events.  She had a bowel perforation discovered during exploratory surgery when she was just one month old that resulted in an ostomy.  Her intestines were reconnected and after seven failed extubations, she had her trach and g-tube replaced in January 2019.  After 256 days in the NICU, Lily finally came home a few months later in April.

Lily has Bronchopulmonary Dysplasia, or chronic lung disease of prematurity.  Her lungs were damaged from the ventilator that was used to keep her alive.  Because of this, she requires a tracheostomy and ventilator support to breathe.  We’re working on weaning her ventilator settings and have some time off of the vent each day!” 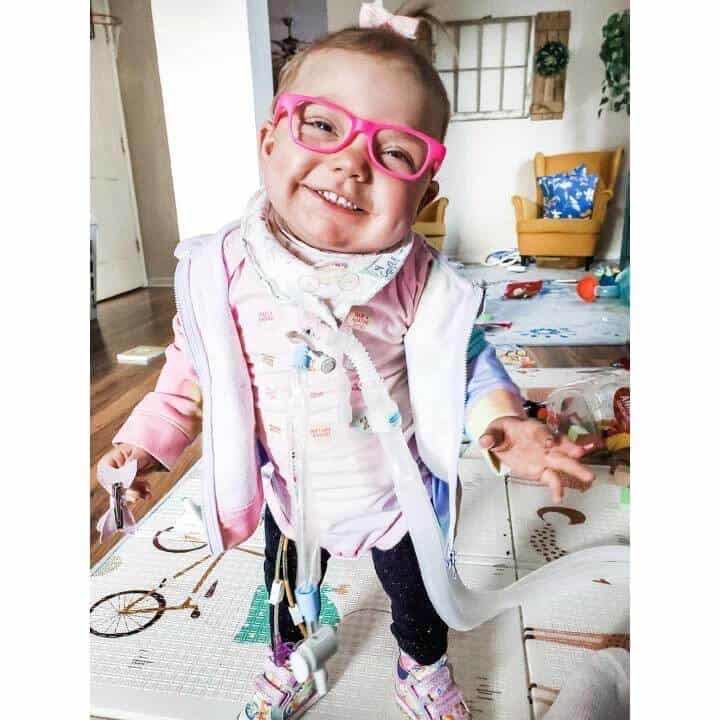 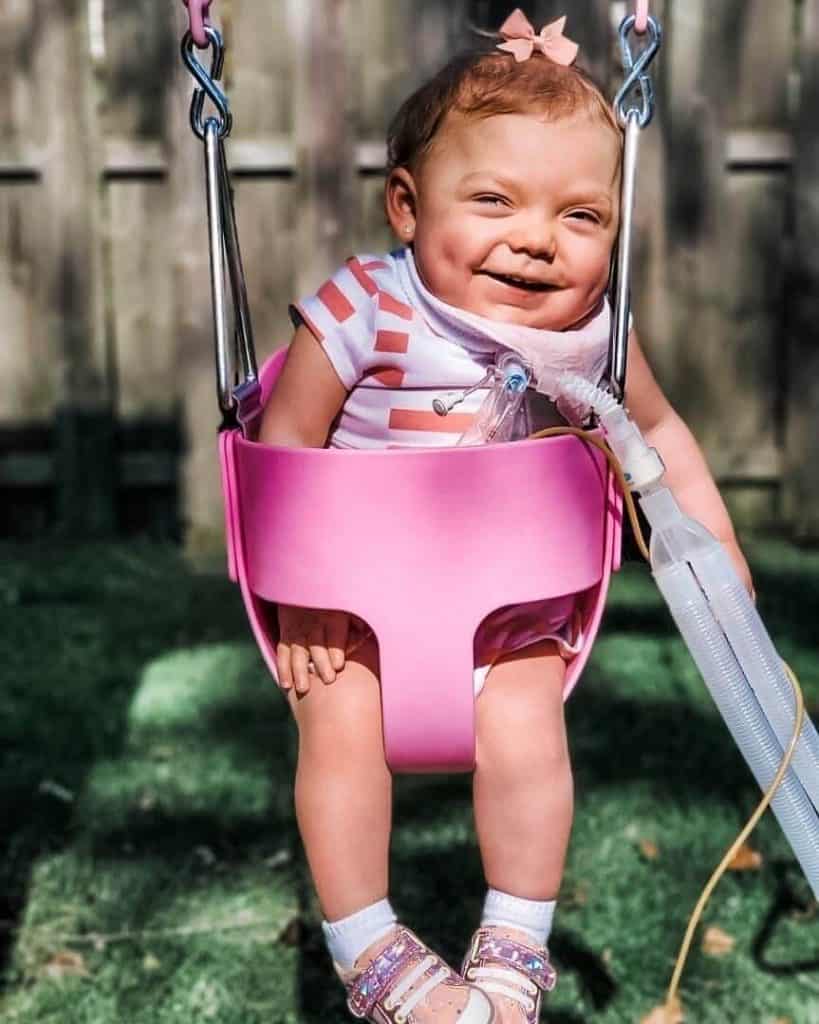 “Amelia was diagnosed with several complex congential heart defects when I was 23 weeks pregnant as well as some lung and vertebral anomalies.  She had her first open heart surgery at 4 days old and her second the day she turned 3 months old.  She had complications including 11 days on ECMO life support.  She was unable to be extubated due to severe airway collapse or tracheobronchomalacia (TBM) requiring a custom length trach and long term ventilation.  Despite still requiring 24/7 ventilatory support, she lives life to the fullest each and every day she gets!  She chases her brother around, climbs her playhouse in the yard, goes to the beach….she JOYFULLY does everything any other kid does, just with more accessories!!” 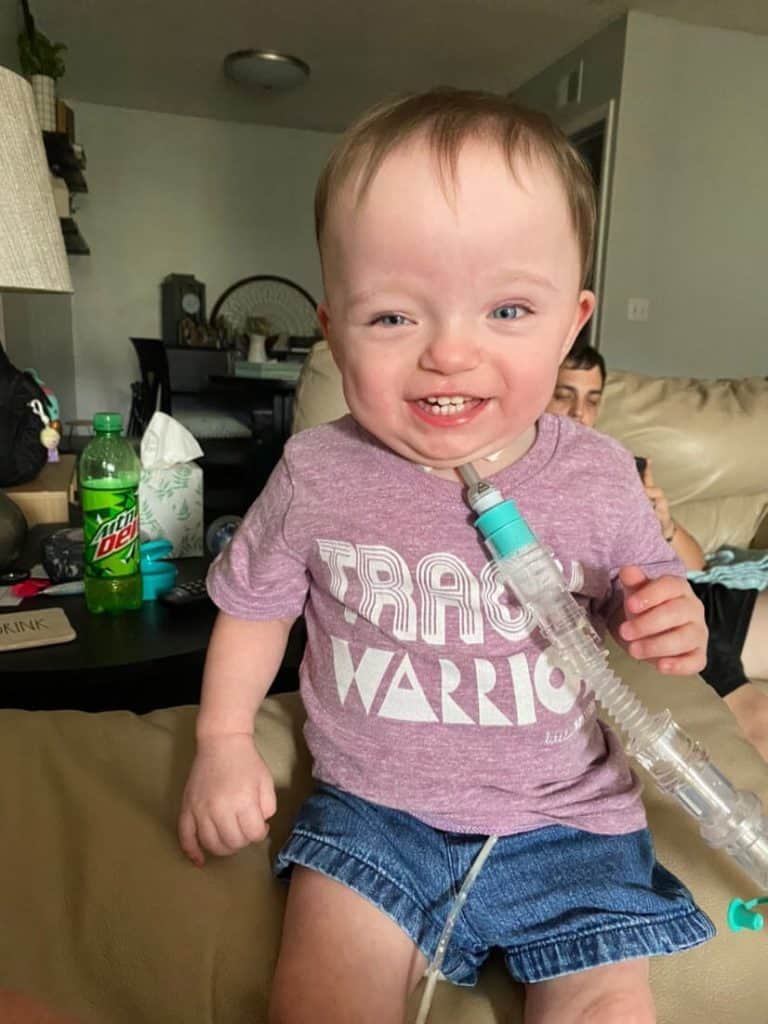 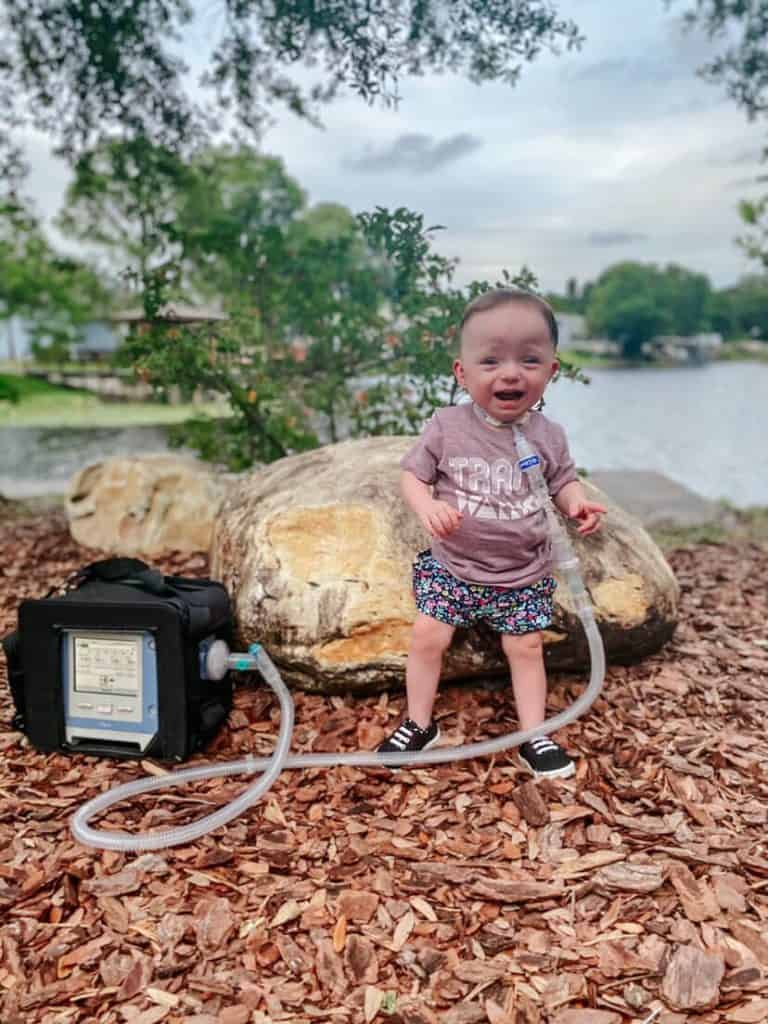 “Remis trach has given her not only a new way to breathe but a new change at life, and an opportunity to get stronger.  After 7 failed extubations, we knew something had to be done so we started discussing a tracheostomy.  Of course my husband and I had no idea what life would be like, but we didn’t care because we wanted our daughter home and this is what had to happen.  Ever since Remi got her trach, she’s grown and thrives SO much.  So have we as parents.  We are all so much stronger, and better together because of her trach! 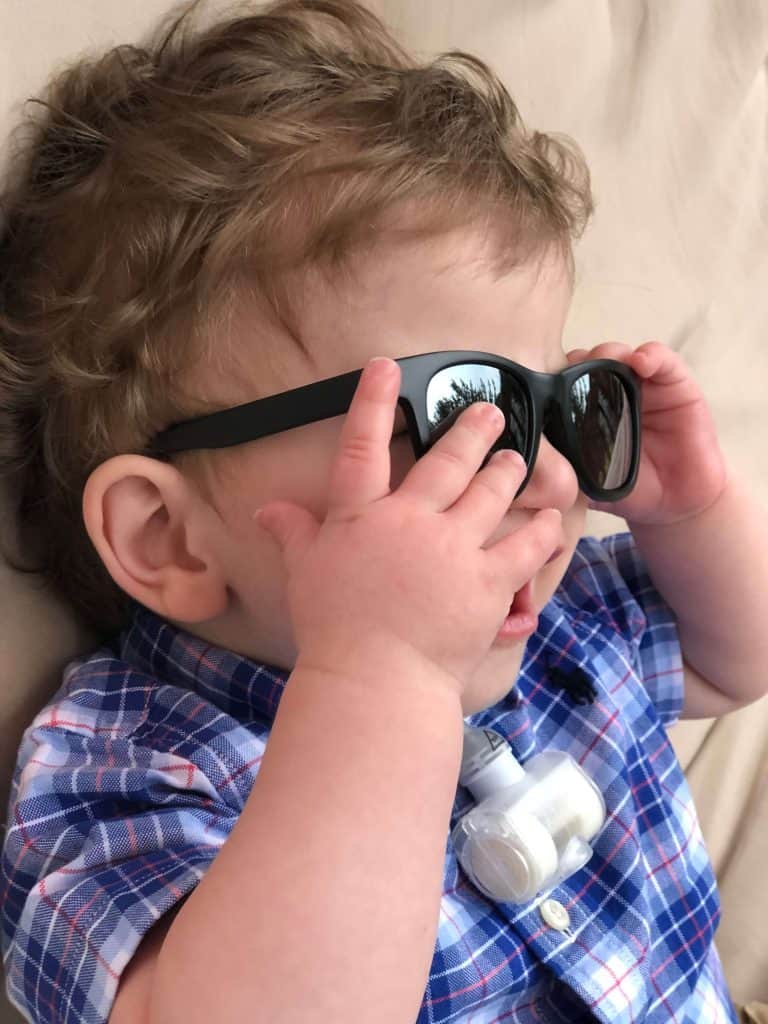 “Sami was born full term with a congenital heart defect (diagnosed prenatally) and a type 4 laryngo-tracheo-esophageal cleft (a severe airway defect diagnosed after birth). He spent several months inpatient immediately after birth during which he endured a few cardiac and airway surgeries as well as a few days on ECMO.

Despite how difficult and stressful trach life is, we love the trach itself because it has given our little guy the opportunity to grow and thrive. Our hope is that as people become more aware of trachs, they realize that they are simply a medical tool. Just like kids with poor eyesight or difficulty hearing need glasses to see or hearing aids to hear, kids with lung or airway issues need trachs to breathe.”

Tracheostomy Education provides free education with a mission of improving the safety and quality of care for those with tracheostomy and laryngectomy through education.  Our library and articles are free for all.

All profits from the Tracheostomy Shop go to supporting this free resource.

What to Read Next on Tracheostomy Education 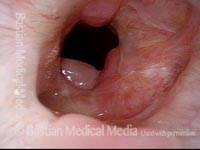 Tracheal Stenosis and Intubation or Tracheostomy 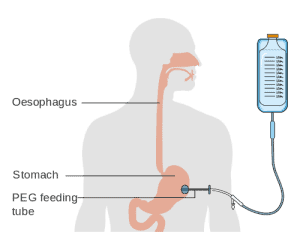