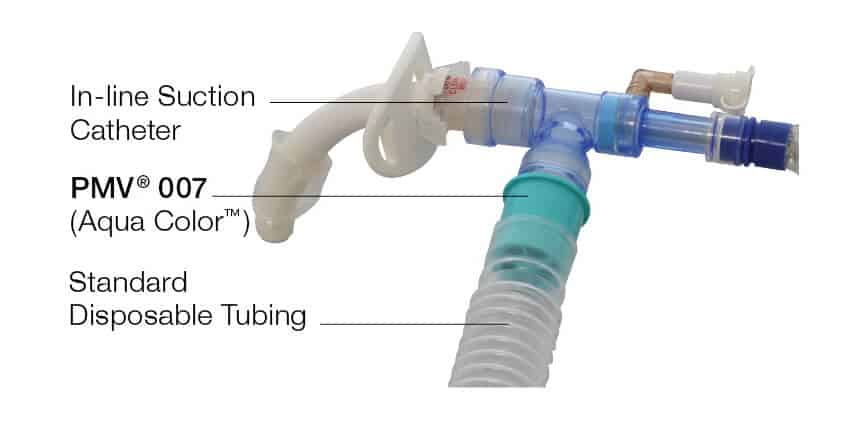 Passy-Muir® Valves and the Montgomery Venitrach are the only two manufacturers of speaking valves FDA approved for use on individuals with mechanical ventilation.  Both valves can be placed in-line with mechanical ventilation.  The differences in design and benefits between the valves can be read in the Speaking Valve section.   The most significant difference is that the Passy-Muir® Valve is a bias closed position valve and does not leak, restoring positive airway pressure.  The Passy-Muir® Valve opens during inspiration, closes at the end of inspiration, and redirects exhalation through the vocal folds and out the nose and mouth.  Due to this unique design, a column of air remains within the tracheostomy tube, preventing secretions from building inside the tube.  The Mongomery Venitrach is an open position valve.  Airflow leaks out of the tracheostomy because it requires exhalation to close the valve.

The ideal patient to trial a speaking valve is awake, alert and attempting to verbalize.  A team approach can result in the earlier introduction of speaking valves and substantial increase in their use (Cameron T et al, 2009; Speed et al, 2013)

Benefits of Using the Passy-Muir Valve during Mechanical Ventilation

The Passy-Muir® Valve may facilitate weaning from mechanical ventilation.  Although the primary purpose of the valve was for speech when it was first invented, many other benefits have been realized.  Since the Passy-Muir® Valve remains in a closed position at the end of inspiration, no air leaks back out through the tracheostomy tube and more normal physiology is restored.  Other benefits during mechanical ventilation include: Restored positive airway pressure, facilitates ventilator weaning, may improve oxygenation, restored cough reflex, facilitates secretion management, improved swallowing and may reduce aspiration, improved smell and taste and facilitates infection control.

Sutt, L et al (2016) demonstrated improved ventilation with the Passy-Muir valve in individuals on mechanical ventilation.  The researchers measured end expiratory lung volumes with end expiratory lung impedance and reported improved lung recruitment when using the Passy Muir® speaking valve. Improved lung recruitment was maintained for at least 15 minutes, even after the valve was removed. The researchers attribute this maintenance to the return of a more normal upper airway resistance since exhalation occurrs through the larynx and upper airway with the Passy-Muir Valve in place.

In terms of quality of life and speech, in a retrospective study, patients on mechanical ventilation reported that being unable to communicate evoked feelings of insecurity, fear and panic, and anxiety which made it difficulty to sleep and rest. The isolation due to communication difficulties was reported to be a greater problem than any direct airway related issues and was ranked worse than pain, suctioning and difficulty breathing (Bergbom- Engberg, I & Haljamäe H., 1989).  This frustration can be reduced by providing a means of communication.  A recent study reports increased satisfaction and quality of life for tracheostomised ICU patients once able to verbally communicate using a speaking valve.

Procedure for Placing a Speaking Valve during Mechanical Ventilation

Prior to placing a speaking valve, obtain an order for speaking valve placement in-line with mechanical ventilation.  A protocol to specify ventilator setting changes is best practice in order to make possible ventilator changes for patient comfort.  Some facilities use the speaking valve within weaning protocols to streamline the process and to make certain all individuals are assessed.  Review the chart for any information that may result in difficulty exhaling through the upper airway such as vocal fold paresis, upper airway edema, granulation tissue, or tracheal stenosis.  The clinician should always check for airway patency, but these factors are considered for further steps if the patient does not tolerate a speaking valve.

A speaking valve and ventilator changes require a physician order.

Passy-Muir™ suggests increasing tidal volume (TV) in volume controlled ventilation modes until the peak inspiratory pressures (PIP) match those prior to cuff deflation.  This assures adequate alveolar ventilation with the cuff deflated. An increase in delivered tidal volume may be a temporary adjustment until strength of the pharyngeal and laryngeal muscles is regained.  400cc is the maximum recommended additional volume.

It is only possible to increase the TVs of mandatory breaths.  In pressure control ventilation, the pressure does not typically require increasing.

PEEP provides continuous airflow within the circuit.  This can make it difficult for the patient to close the vocal folds and can be uncomfortable during cuff deflation, resulting in coughing and autocycling of the ventilator.  Passy-Muir also suggests  turning off ventilator delivered PEEP, as physiologic PEEP is restored with the Passy-Muir Valve.

In-line policies and procedures from various facilities designated by Passy-Muir as “Centers of Excellence” are located on the Passy-Muir website here.

All alarms on the ventilator must be re-evaluated for appropriate adjustments before, during, and after use of the Valve. Exhaled volumes are not returned to the ventilator since all exhaled air is redirected through the upper airway.  Low volume alarms will likely alarm since exhaled volume is no longer delivered back through the tracheostomy tube and through the circuit. Some alarms can be adjusted or silenced to stop unnecessary alarming (Passy-Muir, Inc.).

Ventilator Connections with the Passy-Muir Valve 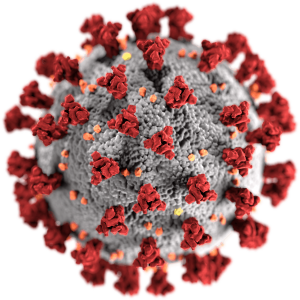 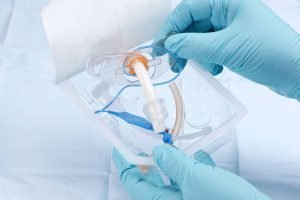